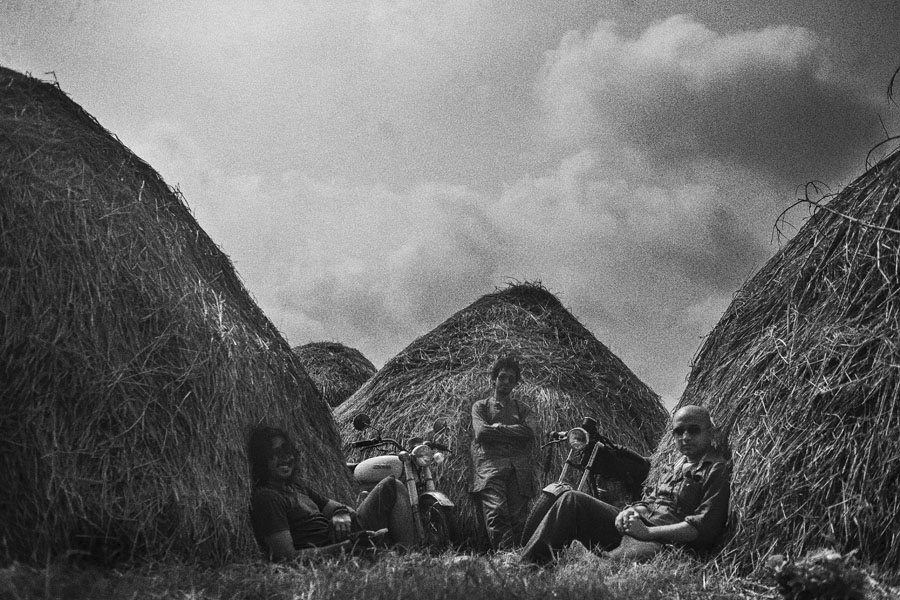 Who else…you!’ Tapash replied when I asked who was going to apply for ‘sick-leave’ from Drik. It is always unbelievable for Drik that I can apply for ‘sick-leave’ because the whole Drik is sick and tired of me. Anyway, I didn’t apply before we headed off for Hijla in Barisal where Tapash’s in-law family lives.

Asif kept hammering us to go biking somewhere. Yes yes…it was motorized biking, I mean, motorbiking. Though, Asif didn’t have any faith on his motorbike. I already did some inter district bike trips before. Heyo! Inter-district may sound ‘long bike trip’ for some people but Bangladesh is a small country since 70s.

Tapash had to attend a post-wedding custom sponsored by parents-in-law. The custom was called ‘Jamai Shasthi’. Jamai means daugter’s husband and Shashthi is six. Tapash just explained what it is about. It is custom for Hindu community to invite the daughter’s husband for at least six types of fruits that grow in wife’s house premises. So, it was a matter of must for him to go to Hijla. But, I had doubt if Tapash was ‘honestly’ interested to perform this custom… and, I saw him ‘pasting’ himself with his wife after we reached Hijla.

And, here is our ‘battered’ Asif. He wanted to have ‘The Great Escape’ from ‘My City of Unheard Prayers’.

We made the decision. Tapash worked on the safest route phoning some people. I put some tools in my bag. Asif installed ‘Candy Crush’ in his iPad. We started ‘On Any Sunday Friday’’.

We reached in time…no no…I better say we reached ‘in day’ after crossing two rivers and amazingly ‘tree-tunnel’ roads. We jumped into a river. Asif and I don’t know swimming…so, we were in near the bank like ducks.

I wonder if Haimanti wants to invite Asif and me anymore because we ate as if the world came to its last day. We made the pans empty in lunch and dinner every time without bothering the etiquette…we even don’t know the spelling of this word. I need to get help of the dictionary to spell the word ‘atiquete’ correctly. And, Asif just made me sure that he doesn’t know the spelling as well. He said, ‘etiCATe’. There were at least four CATs in Haimanti’s house. They also got that we don’t have any ‘etiCATe’ for the cats. We left no bones left for them.

‘I want to see how far this bike can go…’ Asif said for many times. I said, ‘with me, you can hit the end of the world…’.

And my bike got two balls…it was a ‘she’ before….Asif’s bike? It won Asif’s faith…